Is Animal Flex Good For Joints?

Animal Flex Has A Lot Of Ingredients, But Is There Something Better?

Animal Flex is a joint supplement by Universal Nutrition that claims to repair connective tissue, provide joint lubrication, protection, maintenance, and rebuilding, and optimise joint health and function. Unfortunately, it is highly unlikely to achieve any of these goals.

The main Animal Flex formula consists of glucosamine, methylsulfonlymethane, chondroitin sulfate a, chondroitin culfate c, flaxseed oil, cetyl myristoleate, ginger root, turmeric root, boswellia serrata extract, quercetin, and bromelain. And individually a lot of these ingredients are pretty good, in fact when it comes to MSM, Animal Flex may well be one of only a handful of supplements that could actually contain enough of the ingredient for it to be an effective dose. The problem is that it makes a few key mistakes. It's by no means the worst supplement on the market, and with a few changes it could be great.

The problem is that all the ingredients are lumped together in three proprietary blends. This masks the actual dose of each ingredient and makes it impossible to know if enough is present to be beneficial, although for many it is still clear that there isn't. It also makes an error with using Flax Seed over algae as an omega 3 source. Omega 3 comes in the 3 main types, DHA, EPA and AHA. AHA has to be converted into the other two for it to be effective for humans wasting most of the resource. Unfortunately Flax Seed is mostly AHA, whereas fish oil and algae are EPA and DHA meaning the dose of Flax Seed in Animal Flex is far too low.

Then we have the turmeric extract, this really needs to be curcumin extracted from turmeric, otherwise you need far more than is in Animal Flex. It's mistakes like these that have it falling short, whereas with some minor changes we'd have a really good product.

Animal Flex also features a range of vitamins and minerals that includes vitamin c, vitamin e, zinc, selenium, and manganese. While these are admittedly present in useful doses, they aren't the core ingredients of the supplement and there are more important joint pain relief vitamins (like vit d) that could've been a focus instead.

There are plenty of great joint products out there that will lead to healthier connective tissues and joints, Animal Flex just isn't one of them. We'd suggest FlexAgain instead of Animal Flex, although Animal Flex isn't bad.

Animal Flex currently holds an overall rating of 4.55 out of 5 on Amazon.com, which suggests it is a good product. The positive reviews tend to focus on people generally feeling better within themselves after taking it. This does seem pretty reasonable, seeing as it's definitely going to be better than taking nothing, and at least some of the ingredients are going to be in the right dosages.

However, when looking at the Animal Flex negative reviews, the problems that we expected to see based on the formula start to appear. There were a few users of the joint supplement is that reported experiencing feeling no improvement in joint pain or joint health. Although in general animal flex reviews were positive. Then there are the animal flex side effects that people reported, such as jitters, stomach pains, and other gastrointestinal issues. This isn't overly surprising in a supplement with a large content list like this.

Glucosamine is a supplement found in shellfish that studies show can aid with joint pain. It is able to do this as it can stop the collagen that cartilage is made of from degrading or slow the process down. This also makes it very useful to help stop osteoarthritis from progressing (1).

Unfortunately, for glucosamine sulphate to be effective 1,500 mg must be consumed. Unless it's all glucosmanine HCL, however, animal flex shows that it's a mix of the two. So there could be enough here, we expect they've gone for the cheaper glucosamine sulphate, or why bother including it at all when HCL is simply a purer version.

While the proprietary blend hides the exact dose of glucosamine present in Animal Flex, it is likely it will be enough, as it's listed as the top ingredient, however if there is enough in here, then it means there isn't enough MSM which needs 3000mg. And with the whole blend containing 3000mg, the total of 4500mg for the two ingredients simply don't fit.

MSM is found in green fruits, plants, and vegetables and is high in sulfur. It has antioxidant and anti inflammatory properties similar to glucosamine sulfate and can ease the symptoms of osteoarthritis, improve joint health, and offer other antioxidant properties to the body (2).

The dose used is again an issue though. As the entire Animal Flex Joint Construction Complex blend weighs 3,000 mg, it is impossible for it to contain the 3,000 mg daily dose of MSM required for it to be effective. As above, either there's enough MSM or glucosamine in animal flex, but there can't be both.

Chondroitin is a substance that occurs naturally in the human body and is one of the main components of cartilage. Supplementing with chondroitin can be useful for helping to ease joint pain and stiffness, as well as relieving the symptoms of osteoarthritis (3).

Different chondroitin sulfates can have different effects, with chondroitin a being the most effective for its collagen boosting properties, but also potentially being capable of causing the greatest catabolic effect (4).

The Animal Flex Joint Construction Complex proprietary blend therefore not only makes it impossible to know how much chondroitin is present overall but also what balance of the different types of chondroitin are included. That said, chondroitin really only works to support glucosamine, and once again, there has to be at least one of the ingredients that doesn't fit.

If we're being incredibly charitable, there could be 600mg of glucosamine HCL 2350mg of MSM which would give us close to the right amounts of these ingredients. It would mean the rest are pointless however. This wouldn't be terrible, but it would be a lot better if they just put the right doses of the two ingredients.

Flaxseed oil is obtained from the seeds of the flax plant and is commonly used in supplements due to it containing alpha linoleic acid. This can help with blood glucose, blood pressure, and cholesterol regulation, and is useful for treating things like diabetes and metabolic syndrome.

However, flax seed oil needs to be consumed in daily doses between 15 and 50 grams to be effective (5). This means even a proprietary blend can't hide the fact that there isn't enough present, as the entire Animal Flex Joint Lubrication Complex blend weighs just a single gram. Other omega oils as we mentioned in the intro are made of DHA and EPA right from the off, meaning that you don't need to intake nearly as much.

The most annoying thing about the choice of flax, is that Animal flex isn't actually vegan, which is really the only reason to choose flax seed over another omega source.

Cetyl myristoleate is an ester featuring a monounsaturated fatty acid and alcohol. Studies have shown it has the ability to lubricate joints and reduce inflammation, while helping to treat fibromyalgia, arthritis, and other musculoskeletal conditions (6).

With 250 mg daily of cetyl myristoleate being needed to be effective, it is possible it is the first ingredient there is enough of in Animal Flex to be of use. That said, with it once again hidden in the Joint Lubrication Complex blend with other ingredients, it is still impossible to know.

Ginger root is widely used as a supplement for its powerful antioxidant and inti-inflammatory properties. It can help to prevent oxidative damage to the joints, lower cholesterol, enhance the immune system, and encourage better digestive health.

It is also added to supplements for its ability to enhance the bioavailability of the other ingredients in them as well (7).

Unfortunately, at least 3 grams of ginger is required daily for it to be effective. With the entire Animal Flex Joint Support Complex weighing just a gram itself, it is simply impossible for it to contain enough to be of use. To make matters worse, there are options available and competitors do use them, they are however a bit more expensive as the extracts are patented. For example eurovita 77 an extract of the active ingredients in ginger (ginsenosides) can be dosed in 255mg and have the same effect.

Turmeric root has been widely used for decades as it contains curcumin, which is an amazing anti-inflammatory and a rich source of antioxidants. It can completely neutralise free radicals in our body, preventing them from causing damage to our cartilage, joints, and organs (8).

For this to be effective though, 1,500 mg of turmeric must be consumed each day. As the Joint Support Complex blend in Animal Flex only weighs 1,000 mg itself, it simply can't contain enough curcumin to be of use. In the same way as ginger, they could've used a pure curcumin extract to have gotten around this problem.

Boswellia Serrata Extract is a gum obtained from a tree better known as frankincense. Long used in ayurvedic medicine, it is thought to offer benefits such as reducing joint inflammation, relieving the symptoms of osteoarthritis, and even easing swelling of the brain (9).

Unfortunately, most studies are in the early stages, and none of these benefits have been proven conclusively. Even still this isn't a bad inclusion in the Joint Support Complex in Animal Flex, the dose is probably fine and boswellia serrata is in a lot of the other best joint pain supplements.

Quercetin is a bioflavonoid found in fruits and vegetables like apples and onions. Studies have shown that it can have anti inflammatory, anti oxidant, and anti artherogenic effects on cells, however these don't translate well to living humans, as it has low bioavailability.

Even for the minimal effects it can have though, between 1,136 and 2,272 mg must be ingested each day to achieve them (10). This is far beyond what could be in the 1,000 mg blend present in Animal Flex.

Bromelain is an enzyme found in pineapples which can promote digestion and protein metabolism in the stomach, ease heartburn, provide nasal decongestion, boost the immune system, and function as an anti inflammatory pain reliever.

Daily doses of between 200 and 2,000 mg are required to produce these effects. This means even if there is enough present in Animal Flex (and in this case there probably is) to be of some use, the benefits will be on the lower end of the spectrum. Again it's another good ingredient for joint supplements, but it's more of a "b tier" ingredient, we like to see it, but it isn't a backbone ingredient.

Animal Flex may use mostly ingredients proven to help with joint issues, but they just aren't present in doses high enough to be of use. Looking at the Animal Flex review section, it seems most of the benefits people did notice could be obtained from a simple vitamin supplement.Given its overall ineffectiveness for treating joint pain and problems or healing joint tissues, combined with its price and the potential for side effects, you would be wise to steer clear of Animal Flex and look to spend your money on some more effective joint supplements instead.As always we recommend FlexAgain as an alternative, it contains similar ingredients, but actually lists the amounts so we know they're within the effective ranges. 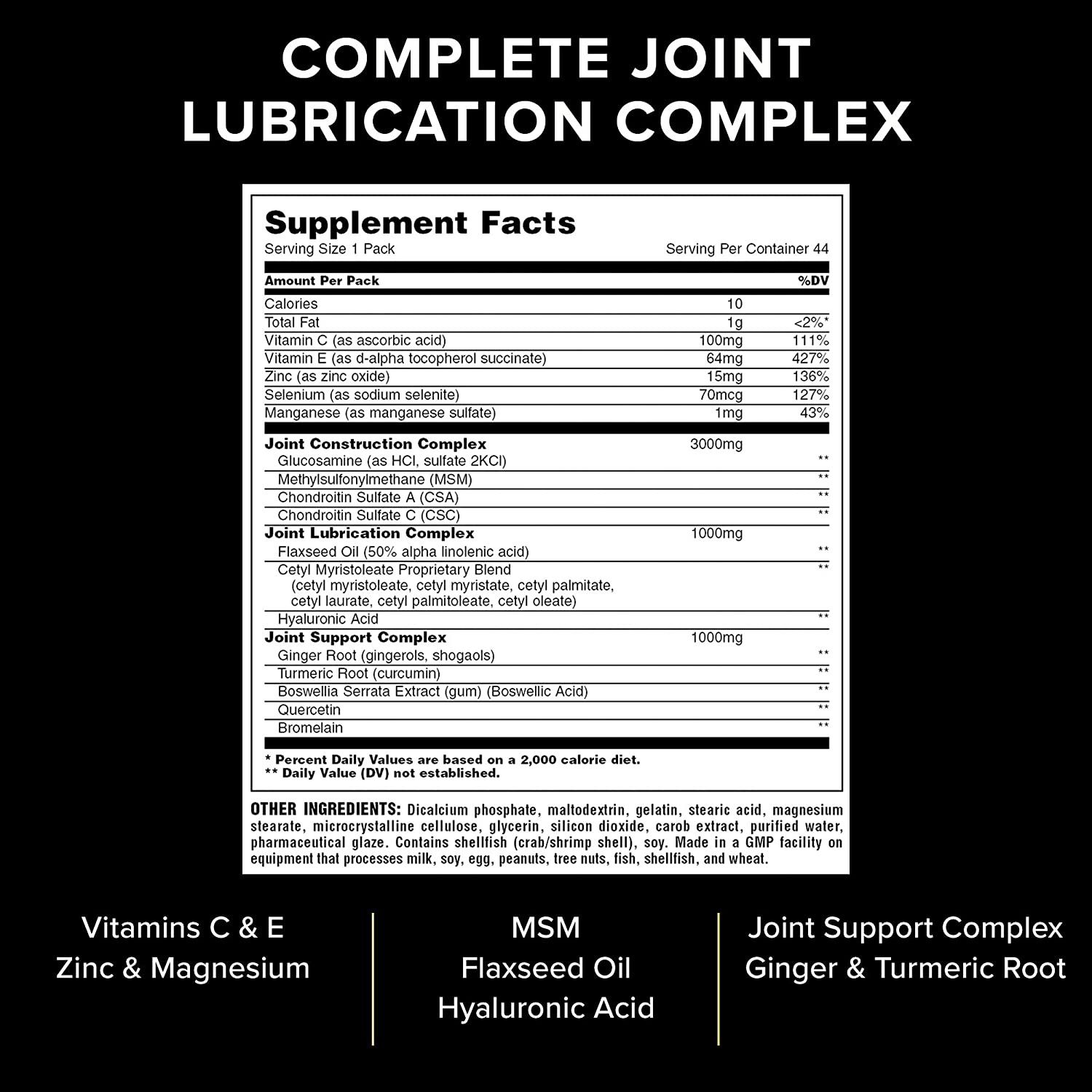